The Dog Nail Trim is recommended to be done about every two months on average. Unless he is spending sufficient amount of time running on hard surface so that his claws are grinded down naturally. If he has due claws though, those of course need to be trimmed regularly as they don’t touch the ground while walking.
First it would be helpful if the dog gets used to have his feet picked up by you. Start by just touching the one food, and follow by giving him a treat! Foot by foot. Once he is willingly accepts being touched by his feet, start lifting them up one by one. Lift up , set it down follow with a treat every time. Until you can even hold the food up in the air for a longer and longer period of time. He will like having his feet picked up. Create positive association with the tools you are planning  on using by showing him the clipper, take them out of sight and provide a treat. Last not least would be, lifting up his foot and him allowing us to touch his feet with the clippers followed by a treat.
Once you are ready to actually clip a nail, just take the very tip embrace it with the cutter blades and snap it. Do not squeeze slowly. That would be similar to a pinch sensation, which could be painful. And of course follow with a treat after every cut.

If the dog has grown claws that are too long, it is necessary to cut them off little by little every week. If a nail that is too long is cut back a whole lot, the vein (quicks)  inside the nail will be injured and the claws that are cut to short might bleed. Once that happens, and is not handled correctly, It could also cause an infection!

Use Medi Styp to stop the bleeding.

Tools to be used:

Use the clipper that look like a bolt cutter shown in the picture left.
These have strong cutting edges and have very strongly constructed handles that allow to cut a nail in a snap- instead of a hurtful squeeze.

The use of a dremmel is recommended on dogs that either do not accept the clippers at all, or to take the edges off the claw 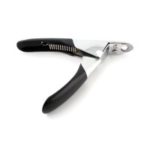 Do not use the kind of clipper (Guillotine) that has a hole to stick the nail through and then has a blade that pushes through the hole. This kind is not recommended for thick nails and the squeeze can be hurtful.
Puppies should have their nails trimmed just as regularly. It is recommended to use the human nail clippers of the larger size.

On small dogs with thin tiny nails, use the human toe nail clippers.

Camino Verde Pet Resort provides nail trims for dogs of any size for $15.00
You do NOT need an appointment, just walk in during business hours